Have you ever wondered how top golfers can hit the ball so far, so effortlessly?

Have you ever wondered how a baseball pitcher can throw such a fast ball? https://youtu.be/jZKvJY6gDfg

Have you ever wondered how a discus thrower can throw so far? https://youtu.be/a0lwtTGAEX4

Have you ever wondered how some Aussie Rules footballers can kick the ball over massive distances? https://youtu.be/e4KMzrirQo8

Look very closely at the body movements in these videos.

Whether it is hitting a golf ball, throwing a ball, kicking a football or paddling a dragon boat, the way you coordinate the different parts of your body is critical for getting the maximum speed out of your body.

This post will introduce you to Kinematic Sequences. Kinematics is the study of motion of objects (position, velocity, acceleration, etc.). In this post, the Kinematic Sequence is the order or sequence that you engage the different body parts during a golf shot, dragon boat stroke or any other proximal-to-distal sequencing of body segments. 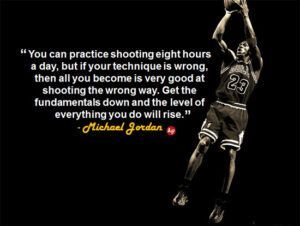 at the more serious paddlers who have solid technique, strength and fitness who now wish to take it to the next level.

Remember, we need to get the basics of the technique right first before trying this because if we don’t we will end up doing a poor technique very well. This would be fine if we are a lone paddler but we are not. We are in a crew striving to have everyone with the same technique.

Let’s start with an example of a simple, pure kinematic sequence that we all know. Cracking a whip. Imagine the movement of a whip as it cracks. The handle is flicked forward and the tail follows smoothly all the way to the tip. The smooth pattern, or sequence, allows for the highest speed to be achieved at the tip of the whip, known as the summation of speed principle; where the speed increases as the energy is transferred down the length of the whip.

This sequence can be translated to dragon boating where the goal is to achieve maximum velocity. We utilize our body movement (kinematics) to maximize the energy transferred to the endpoint of the movement – our paddle. In dragon boating we use our legs (pelvis), torso, shoulder and arm.

The parts of your body that you use to move your paddle through the water represent the pathway of movement. Along this pathway we measure certain checkpoints that indicate how smoothly you are creating the whip effect.

The checkpoints are shown graphically as a kinematic sequence (summation of speed) shown below in an example of a baseball throw and golf swing. 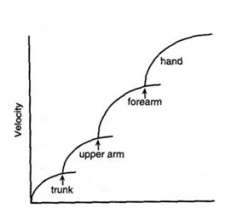 The Summation of Speed Principle in a throw 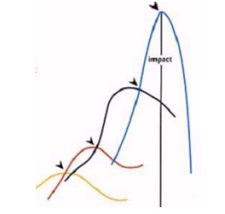 Efficient Kinematic Sequence of a Golf Swing, showing in order, the velocity of the pelvis, thorax, arm and club head

You will notice that although these are different sports the kinematic sequence graphs are very similar. To achieve maximum results the body segments not only have to fire off in a specific order but also at a specific time. Each subsequent body segment fires off at the peak of the preceding one.

When the speed of each successive segment or checkpoint peaks in a smooth order as shown in the graphs, the speed of the end point is maximized.

If one of the checkpoints does not fall in order, energy is lost and maximum speed is significantly reduced.

The key to an efficient transfer of energy in a dragon boat stroke is for each body segment to accelerate and decelerate in an orderly sequential manner.

Body segment sequences can described in one of 3 ways:

What does this mean and how does this effect efficiency? How does it transfer into dragon boating?

Firstly, the fanning method does not transfer energy as well as the riding method or the stretching method. So we will put that one to bed now.

Back to golf. Look at the two downswing kinematic sequence graphs below,

It is obvious that the golfer on the right is out of sequence, the blue curve (the lead arm) peaks before the red (p 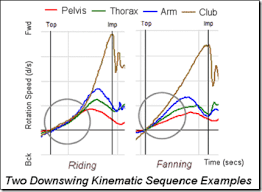 elvis) and the green (thorax or upper body).

There is another obvious difference between the two graphs and you can see from the captions, one is called “Riding” and the other is called “Fanning”.

Focus in on the area in the grey circle; this is the beginning of the downswing.

Look at the middle graph first; the two curves rise very closely together meaning that the pelvis and the thorax are turning at about the same speed and accelerating at approximately the same rate (at least for the early portion).

That means there is no relative speed difference between the two body segments so the thorax is “riding” on the pelvis and the core muscles are in isometric contraction. Let’s look at this from a muscle bio-mechanics perspective. Check out the Force-Velocity Curve in the graph below.

The energy generated by the legs and butt gets the pelvis turning, and in the “riding” example, the core is strong enough to pass this energy (and speed) directly to the thorax. At the appropriate time the core muscles fire explosively, the thorax increases speed but the pelvis is pushed back. This opposite torque causes the pelvis to “peel” off and then decelerate.

The riding method is a very efficient method of transferring and adding energy to the thorax.

Now look at the "stretching" example; here the pelvis is moving slightly faster than the thorax in the early part of the stroke. This means that the spine angle is actually widening under eccentric contraction. The muscles are lengthening slightly so the force-velocity curve now shows that the muscle is capable of generating even more force than in the isometric condition.

This shows that it is beneficial to stretch the core; it allows the muscles to produce more force and store energy which is returned and transferred to the thorax as soon as the muscles begin concentrically contracting.

The stretching method is more efficient than the riding method provided that the stretch is not too excessive or too slow.

Now go back and look at the golf and discus videos at the start of this post. You will see "stretching" in action.

Looking at the shape of the kinematic sequence curves in the early part of the stroke can give us insight in how powerful the stroke is likely to be; moderate stretching and riding are good.

The best kinematic sequence for your dragon boat stroke is to fire off each subsequent body segment when the previous one hits its maximum force. Not sooner. Not later.

Image based on a graphic from http://www.coachr.org/biomechanics.htm

Note: The actual power generated by each body segment is not drawn to scale.

Notice how there has been no change to the power generated by each body segment. It is all about the sequence they are fired off in. Get the sequence timing right and you can become a better paddler in just one day.

So we know what it is but how do we know when we are there? Realise that every golfer has a different swing but the important part is getting the sequence and timing of it right.

Similarly, there are many different paddling techniques and individual paddlers’ variations on them, but it is the sequence and timing of it that we are looking for here.

I can show you rowing machine examples of what happens if the body segments are doing the right movements but in the wrong order.

And here is one more: https://youtu.be/FctsxV2fygM?t=1m24s

How to find the Perfect Kinematic Sequence

Here are some focus points: