Home Fitness Should You Hanker for an Anchor?
Facebook 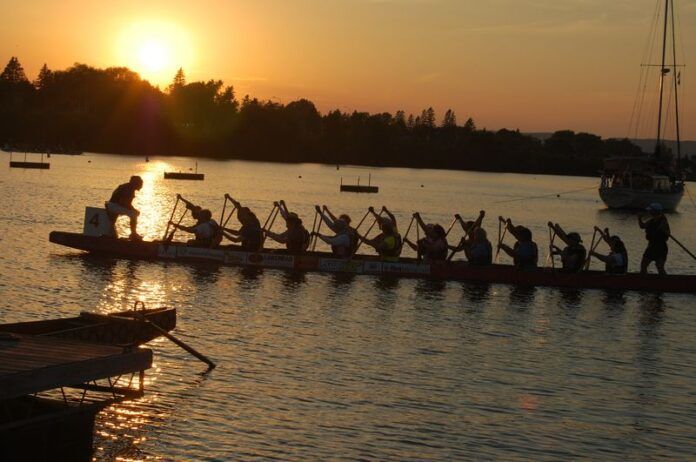 This post will cover a very useful accessory that every dragon boat coach should have at their disposal. It is usually (mistakenly) called a sea anchor but more accurately it is a drogue.

A drogue and a sea anchor serve two very different purposes. Both are made of high-strength nylon or Dacron, are shaped or have hardware to keep them open to oncoming water, and both are designed to resist the water’s exit to create drag. But this is where the similarities end.

What is a Drogue

A drogue is a submerged device towed from the stern of a boat for the purpose of limiting (but not stopping) its speed and for keeping the vessel’s stern at a set angle to following seas.

What is a Sea Anchor

Conversely, a sea anchor is a device deployed from the bow of a boat in an attempt to stop her movement through the water and to keep the bow heading into oncoming waves.

How is a Drogue (Sea Anchor) useful in Dragon Boating?

Before continuing, I am going to take some literary license here and call the drogue a sea anchor.

Because for some reason, in Australia at least, these are referred to as sea anchors in dragon boat world even though they are tied to the stern of the boat.

A sea anchor will help keep a moving dragon boat straight. Why is this a desirable thing?

Firstly, it allows inexperienced sweeps to have more time to make steering corrections.

And finally, it also helps deal with a situation where a crew has more power or weight on one side of the boat which tends to want to turn the boat.

A sea anchor also acts like a passive drag system. It adds more drag to the boat.

This means the crew has to put down more power to get a similar boat speed. This makes it a good strength and power training tool.

The additional drag provided by the sea anchor also takes some of the run off the boat.

This slows down the stroke rate and encourages the crew to be more purposeful in their catch and drive phases. Making this a good technique tool as well.

How to Connect a Sea Anchor to a Dragon Boat

A sea anchor needs a main line to connect it to the stern (back) of the boat. This main line should be tied onto the rear of the boat before the sea anchor is dropped into the water. Champion dragon boats have a metal pin (or two) for the tail assembly. This pin is ideal tie off point for the sea anchor main line.

I would suggest that the sea anchor main line should be at least 5 metres long to make sure it is nowhere near the end of the sweep oar. (Avoids tangles)

The sweep is the most logical person to be in charge of the sea anchor. However, it does add an additional task and forces to a role that can already be taxing. So it is something more suited to an experienced sweep rather than a newbie.

When dropping the sea anchor into the water, note the direction of the current to ensure the sea anchor does not drift under the boat. This may involve getting the crew to initiate some forward velocity on the boat to keep it ahead of the sea anchor.

This can be a tricky exercise for a sweep as, by design, there is a lot of “weight” on the sea anchor which will resist someone trying pull it in.

In combination with boat movements from crew and conditions, this could result in a sweep losing balance.

If you look closely at the sea anchor you will notice a loop at the narrow end.

A second rope that is a lot longer than the main line (2 or 3 metres longer) can be tied to this loop (You can also run the second rope down the inside of the sea anchor).

This second line is also called the “trip line”. The other end of the trip line is coiled near the sweep.

When it is time to retrieve the sea anchor, pulling on the trip line releases the drag by spilling out the water trapped inside.

If your trip line runs down the outside of the sea anchor, it will fold it over.

If you trip line runs down the centre of the sea anchor, it will turn it inside out.

This makes it a lot easier to now pull the sea anchor in using the main and trip lines together.

Using an inexpensive sea anchor on a dragon boat offers many advantages:

Analysis of a Dragon Boat Race