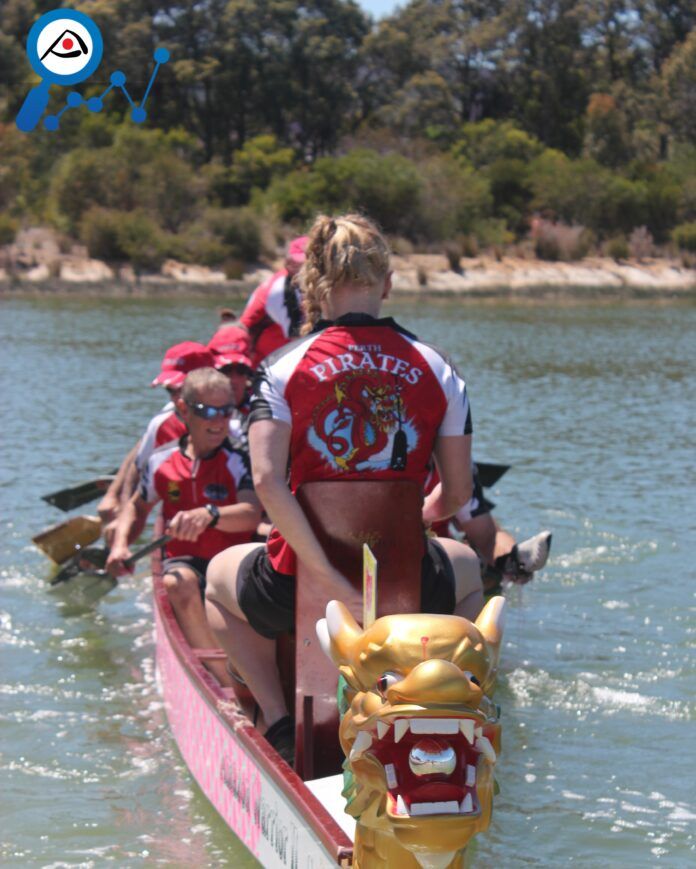 It is the first Regatta of the season. A chance for teams to measure themselves under race conditions and see where they are at on their Dragon Boating journey.

In this post I will analyse one crew’s results and suggest some points they may wish to consider in order to hit a goal time for a 200m race of 50 seconds.

Hopefully, this will show the value of measuring performance and of my mantra “Do What You Can, With What You Have, Where You are”

The profile of the crew and the race:

What Data Will We Analyse?

Here are the assumptions that I have made based on my own experiences:

I uploaded the Garmin data into Garmin Connect and produced the following summary graph that contains:

I am a firm believer in getting to race pace quickly (within 70 meters) and holding that maximum speed for as long as possible – preferably for the whole race. So from a shape perspective, a race speed vs or distance graph should look like this:

From the Garmin the actual race speed vs distance graph is:

Comparing figures 3 and 4 shows that there is a lot of promise in this crew.

Let’s have a closer look at each phase.

Some of the metrics I am looking for in a race start are:

So how did they fare?

The acceleration was pretty much linear at the start – not too many wobbles in the graph – which satisfies item 2 above.

However it took 90 metres to get to that top speed. That is what is killing their average speed. We need more acceleration in a shorter distance.

The stroke rate at the race start was all over the place as you can see from the graph.

The craziness early in the race start can be put down to the Garmin being influenced by impulses passing through the boat from paddlers being out of time (not to be unexpected in a brand new mixed crew but needs to be addressed). Surprisingly the acceleration of the boat was still linear and steady.

The crew eventually settled on a stroke rate between 80 and 84 spm.

So for the race start there are some top speed, acceleration and race start timing items on our list to work on.

The Rest of the Race

Here is where we can get some insight into this crew. I will present the graph with the race start removed (first 90m removed).

The interesting takeaway from this are there are 3 sections in Figure 6:

Where to from here?

Let’s set a goal time for this crew of 50 seconds for a 200m race. We have currently have a time of 58 seconds so we are looking for 8 seconds.

Now, where does this crew sit on the best tool for a dragon boat coach? I have created the calculator below based on the same engine that created the table in a previous post: Laying it All on the Table

From the results we can see that, with the inputs we have chosen, we need to:

That all looks quite daunting but let’s put together a plan to get there.

What should the plan be for this particular crew?

Firstly, 3 of 5 men in the crew are all tall and this was their first time with this crew. That means the, settled on, 80 spm was a rate determined to be optimal BEFORE 3 additional tall dudes entered the fray. This is important.

Note: We could go for any stroke rate as long as we can hit the corresponding stroke length numbers. I have just selected the 3 most realistic options.

Which one should this crew select? Taking my assumptions from the start of this post into account, I would not lift the stroke rate higher. I believe we would lose the taller and heavier paddlers at the higher stroke rate.  So Option 3, increasing the stroke rate to 85 spm is out.

Option 2 seems appealing because it is such an incremental improvement in stroke length (2.8 to 3.3m). And there would be nothing wrong in selecting that one and training for it.

However, the data would encourage me to look very closely at Option 1 first.

Firstly, look closely at the copy of Table 1 below.

The First Section after the race start had the fastest speed, lowest stroke rate and longest stroke length (2.98 m). As soon as the stroke rate started to go above 81 spm in the other stages, the speed suffered and the distance per stroke lessened.

Secondly, consider that by chance, the current stroke rate (80 spm) is marginally too high. This may result in losing some of the potential power from the taller, larger framed paddlers.

Finally, remember my assumption that taller, larger framed paddlers prefer lower stroke rates, and that this crew has 6 of the ten paddlers falling into that group.

Dropping the rate to 78 spm may be closer to the sweet spot for the taller paddlers and one may find that the 3.4m (or EVEN MORE) stroke length may already be there!

Look at the stroke length for the first section in Table 1. They touched on 14.3 kpm at a stroke length of 2.98 m and a stroke rate of 80 spm but couldn’t hold it there. I believe the taller, heavier paddlers just could not keep up with the high stroke rate (80 spm). That said, they got there, even though fleetingly. Drop the rate ever so slightly and they may be able to hold that speed for longer.

Since going above 80 spm is not the answer, maybe somewhere below 80 is. I would experiment with a stroke rate of 78 with this crew . And “Yes”, something as small as a 2 stroke per minute change can make a huge difference. Check out The Perth Pirates crew (in Red) who dropped their rate by 2 strokes per minute and moved from consistent 3rds and 4ths to this Gold medal performance in the State Championships. Compare their stroke rate with the team in the foreground who came second. The Pirate Women were STRONG women where a slower rate and longer stroke length was their sweet spot.

Gathering data is critical to planning for your crews. There are always hidden gems in the data.

I firmly believe this recreational crew has the potential to medal this season if the right training strategy is adopted.

So the plan is:

Lower the stroke rate to 78 spm and lengthen the stroke to 3.4 m with strength and power exercises.

I would suggest that this team add the following to their training program:

Feel free to use the calculator above to do your own “what ifs”. Crunch the numbers. Make a plan. You may be closer to victory than you think.